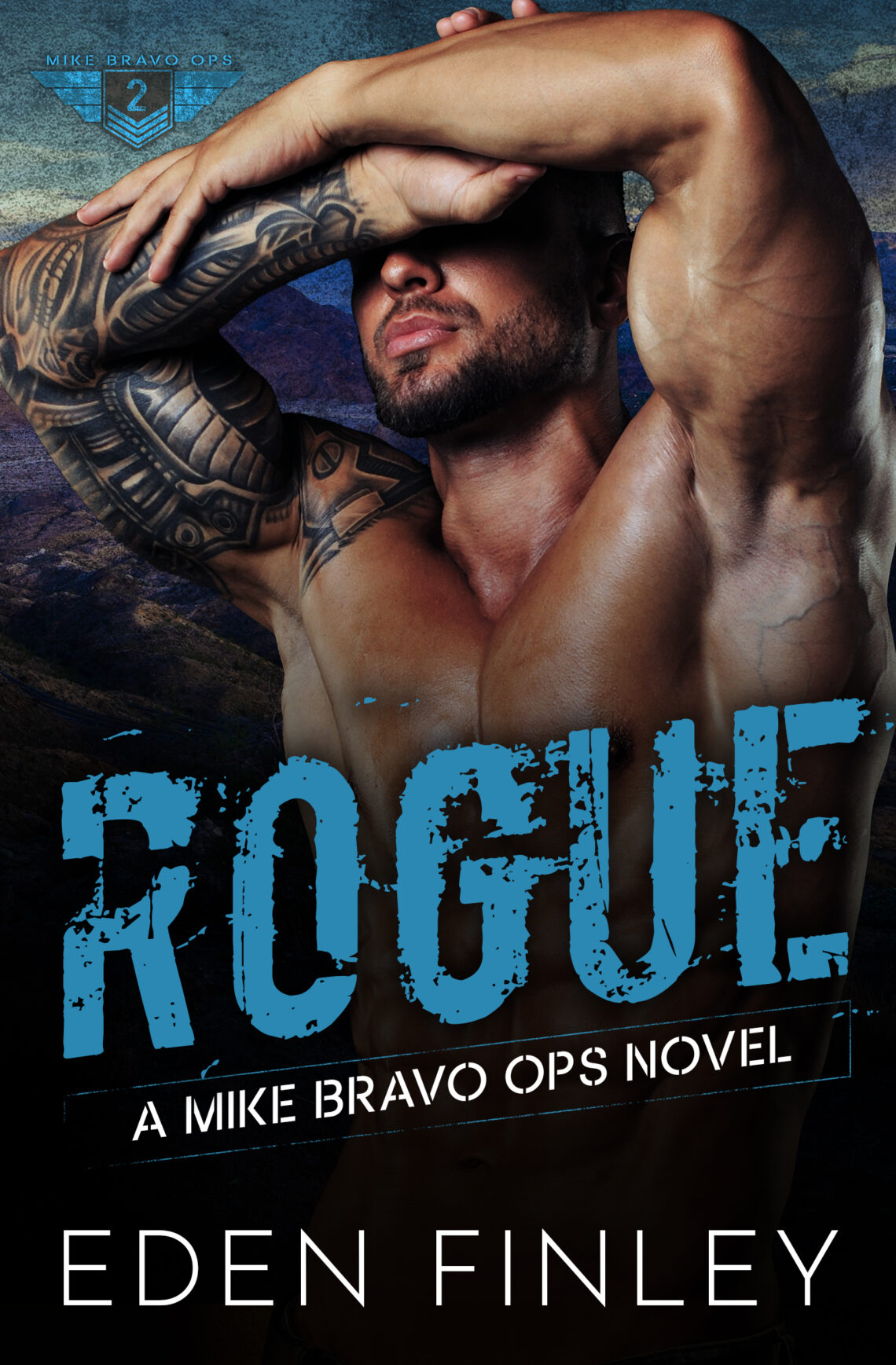 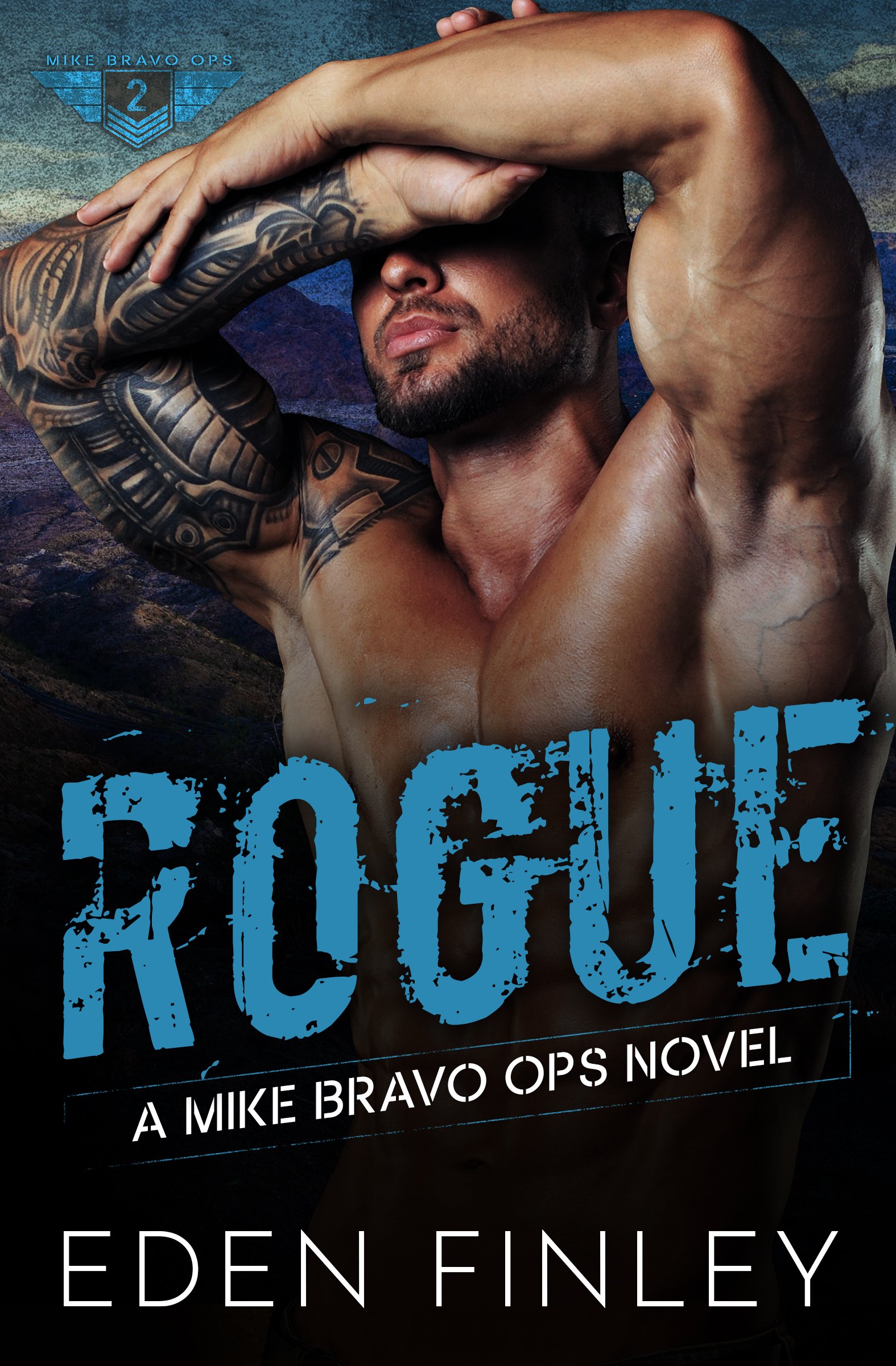 I remember the first time I met Dylan Rodriguez. It was one sweaty encounter I’ll never forget.

The second time we met, he arrested me. I can still see the hot scowl on his beautiful face as he slapped handcuffs on me and realized I was … me.

Dylan’s main goal in life is to forget he ever met me. My goal is to make him mine.

Turns out, I’m better at this game than he is.

When my law enforcement career falls to pieces in front of my own eyes, I don’t know who I can trust.

I have nowhere to go. No one to turn to.

Asking Trav for help is a last resort, but I’m desperate.

If he can’t get me out of this mess, I may as well turn myself over to the guys hunting me down.

I’m not sure which will be more difficult: protecting my life or my heart.

Because when it comes to love, my heart wants what my brain doesn’t. It wants Travis West. 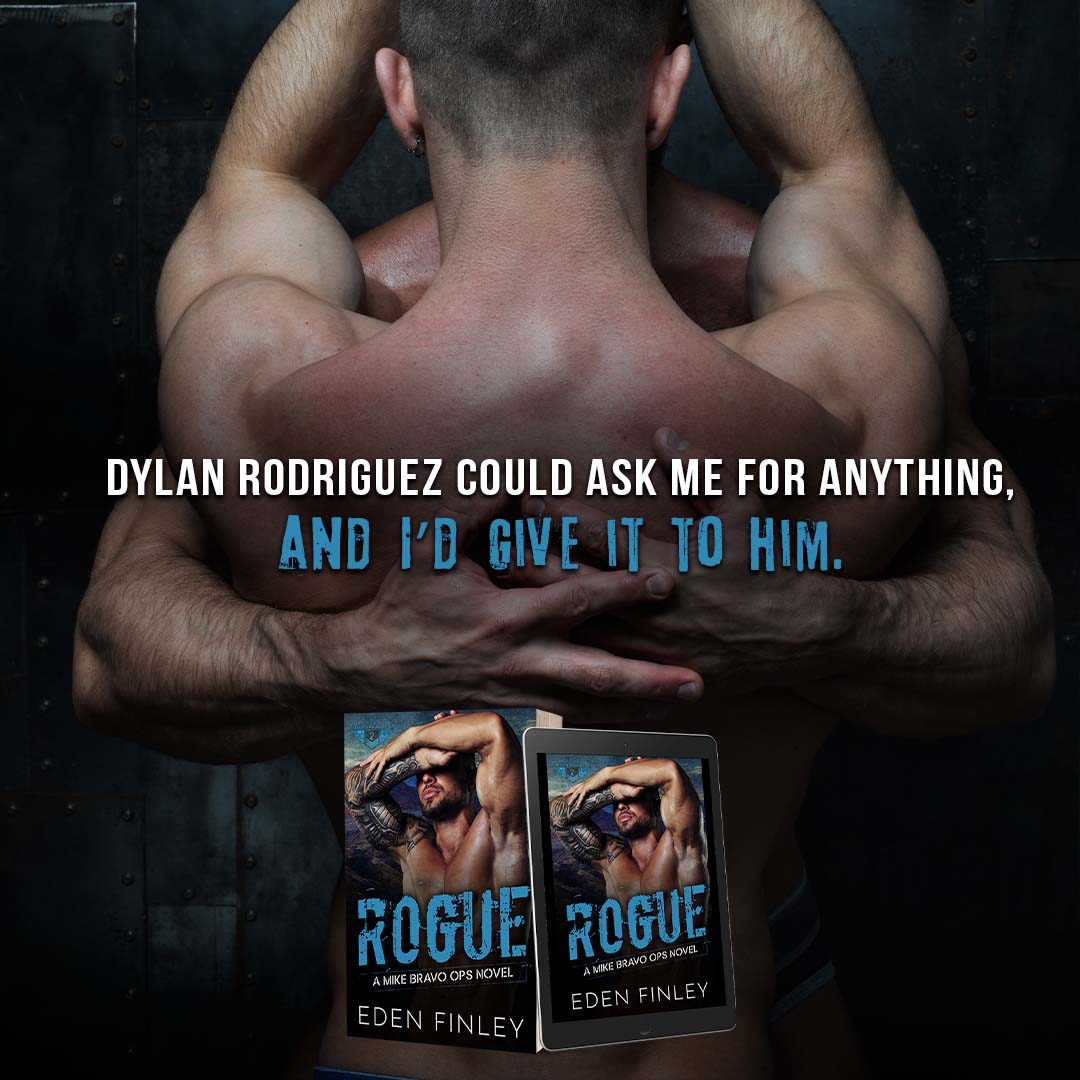 I should give motivational speeches. Three ways to tank your career with one botched raid.

One: Sleep with your target.

Two: Find absolutely no evidence at the scene.

And three: Sleep with your fucking target.

As I stare into the interrogation room behind a two-way mirror at the man who, in my own words, fucks like a god, I want to recoil in embarrassment and shame.

“He’s asking for you,” Special Agent Walker says. “He knows you by name.”

And thanks to the file I was given, I know his full name. Travis West.

I’m regretting giving him my name. Then he wouldn’t be able to ask for me.

I should’ve walked away the minute he pulled his amazing cock out of my ass. No names. No words needed.

“Do you know him?” Walker asks.

Intimately. “We met once. At a bar.” Where he made me come so hard I almost blacked out. I’m not telling my senior officer that.

“Well, he’s the only one who hasn’t lawyered up, but he’s refusing to speak to anyone but you.”

My boss will be watching.

Maybe if we’d found the drugs, my unwitting tryst with a suspect could be forgiven. But that ship was clean. How could I have been so wrong when I was convinced that Jason Carter was one of the biggest drug lords in the US with ties to Mexican cartels.

I want to tell my boss I won’t get any information from interrogating Trav, but I already know what his response will be. You don’t know until you try.

Then Trav glances up and smiles at his reflection in the glass, but I know he’s actually directing it at me. Like he knows I’m about to cave.

“Okay. I’m going in.” And on my way, I’m making a new rule for myself: No more random, anonymous hookups.

I enter the interrogation room and try to stay passive, but his sexy voice immediately throws me off kilter. Not because of the deep rumble of his tone, but because of what he says.

“Do you think you could take these off?” He lifts his hands where he’s cuffed to the table by a chain. “I’m not used to handcuffs being around my wrists.”

Fucker. He knows what he’s doing. Because now all I can picture is him fucking me while I’m restrained.

“Sure.” I guess I’ve decided to play good cop. Passive and friendly, but not flirty.

I release him, and he rubs his wrists like they’re so sore.

“You weren’t cuffed for that long.”

“I know, but I’ve seen people do that in movies.” He leans back in his seat. “So how have you been? I didn’t think I was going to see you again.”

“This isn’t a social chat. I need you to tell me everything you know.”

“Find any drugs yet?” That tiny twitch of his lips tells me he’s in on the operation. He knows what’s what.

“What makes you think we’re looking for drugs?”

“You’re the Drug Enforcement Administration. I’d hope you were looking for drugs, or I have to tell you, you might not be very good at your job.”

“But I’m sure you’re good at yours. What is your job exactly?”

“My name is Agent Rodriguez.” My stupid voice cracks on my last name, making it basically unintelligible.

“What’s that? Rogue-riguez? That sounds promising.” He leans forward. “You willing to go rogue to get the answers you want?”

“Rodriguez. And no. I’m sure I could cut a deal for you and your friends, though … if you cooperate. You were the muscle, right? Hired to protect the cargo without actually knowing what you were protecting?”

“Are you implying I’m a dumbass who’s unaware of my surroundings?”

Now I lean in, locking eyes with him across the table. “Are you telling me you know more than you’re letting on?”

“Impressed enough to tell me what you know?”

“I know lots of things. Useless trivia, mostly. Do you like trivia nights? There’s a really laid-back bar I like to go to when they have trivia. It’s called the Aqua. You ever been?”

The Aqua doesn’t do trivia nights. I should know. It’s where he dicked me out in a bathroom stall.

It’s not like the other guys in my department are unaware that I’m gay, but I like to keep my private life, well, private at work. They all know, but I don’t want them to know details—like where I frequent. I get the feeling that was Trav’s way of gauging whether I’m out or not, so I shut him down. Maybe then he won’t hint at what happened between us.

My job depends on that staying quiet.

Trav eyes me, and I get the impression he’s trying to figure out if I’m denying it for the sake of denying it or if I’m closeted.

Trav glances at his watch and then back at me. “I want to cut a deal.” 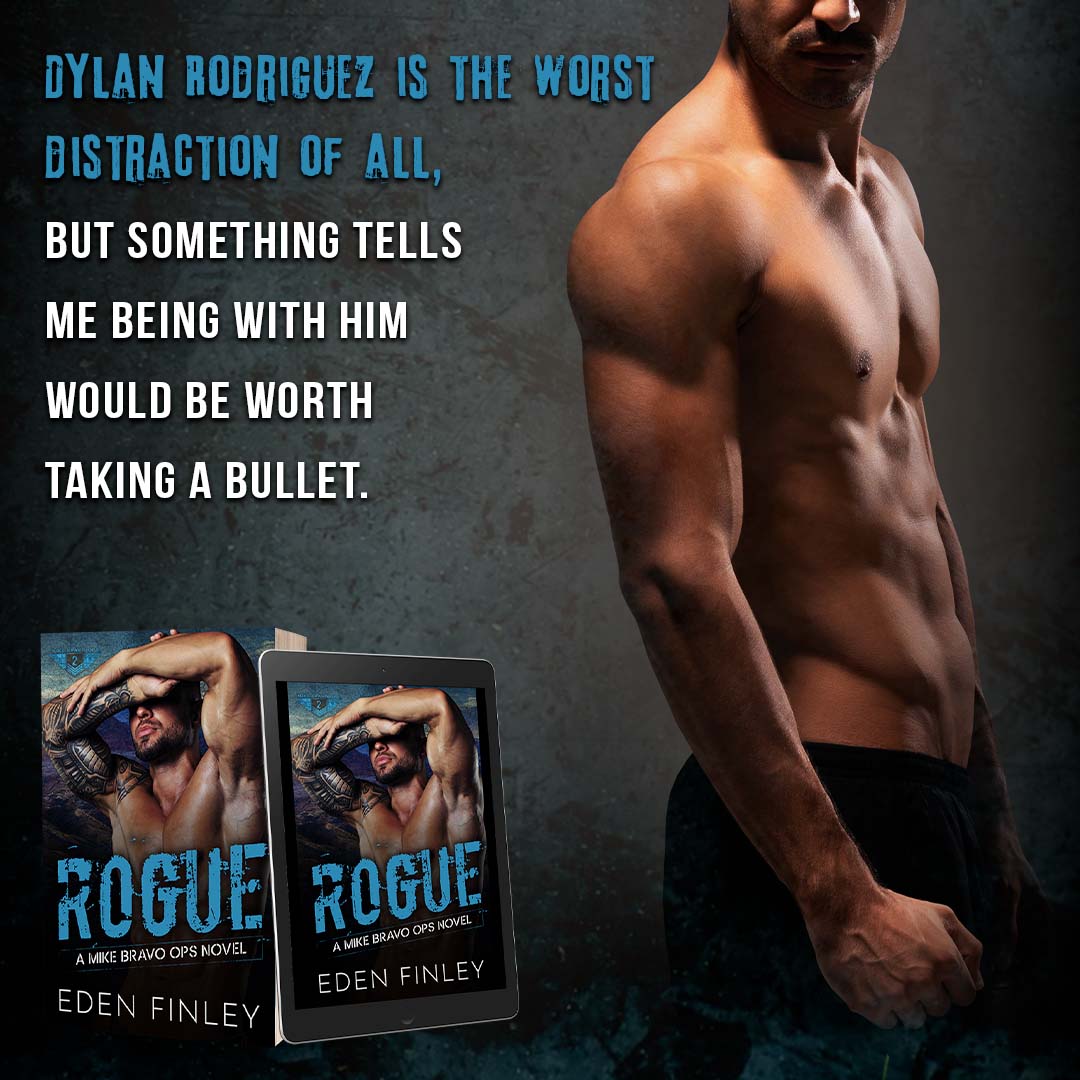 One of Five eARC’s for Mike Bravo Ops: Rogue 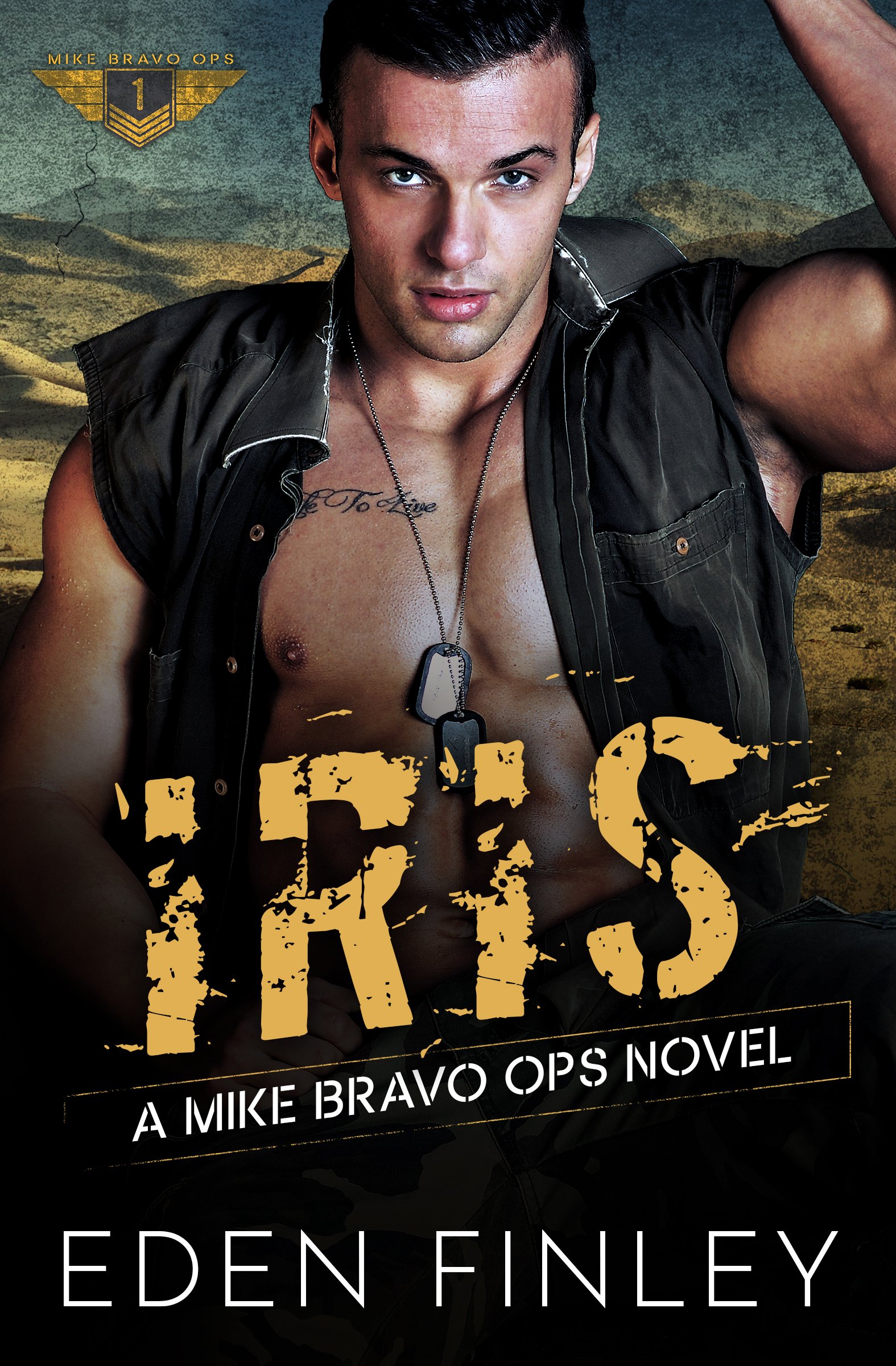 Eden Finley is an Amazon bestselling author who writes steamy contemporary romances that are full of snark and light-hearted fluff.

She doesn’t take anything too seriously and lives to create an escape from real life for her readers. The ideas always begin with a wackadoodle premise, and she does her best to turn them into romances with heart.

With a short attention span that rivals her son’s, she writes multiple different pairings: MM, MMF, and MF.

She’s also an Australian girl and apologises for her Australianisms that sometimes don’t make sense to anyone else. 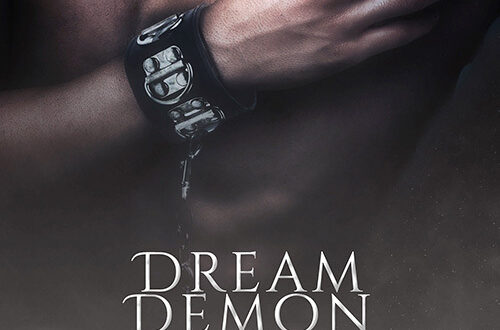