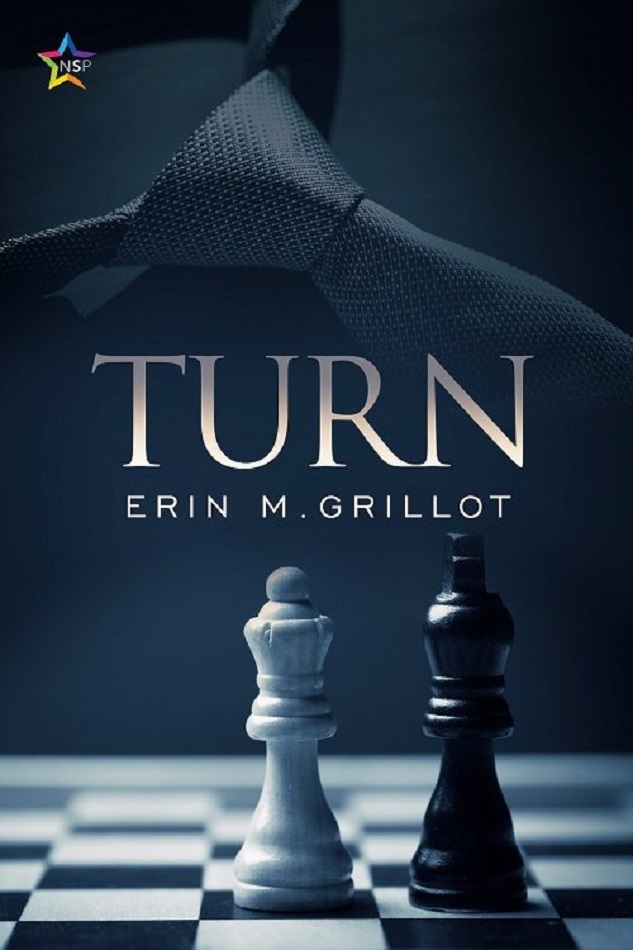 The responsibilities Nathan has taken on are sometimes daunting, even as he loves his job. Always ready to rise to the occasion, he is both respected and feared in the office and in the field. His rise to quiet power has shaped his very being, and he knows each and every move as he plots his days and watches over his agents. His life has shaped him into a loner, however, and that is never more noticeable than when Eli begins work in Department 5.

Eli is not the typical Department 5 recruit, and his cheerful and polite nature is both intriguing and off-putting to Nathan. But as Eli weakens and breaks through Nathan’s walls, they gradually embark on a path of discovery and a relationship that defies both of their assumptions. It is by times quirky and odd, sometimes a little rough around the edges, always a bit fragile. But secrecy, lies, plots, and executions are Nathan’s job, and life—and some habits are hard to break. Finally, the tension their work holds can no longer be contained or ignored, and it threatens to destroy either themselves or all that they’ve found together.

Turn is a story about power, tough choices, and strategic moves—of knowing when to sacrifice a piece in this ongoing game of chess, sticking by your actions, and knowing what the endgame is—no matter what the personal cost. Most importantly, it’s about life’s hardest lesson. Sometimes love isn’t all that you need, and the wants of our hearts aren’t always enough to overcome who we are and the realities of life.

An odd simplicity encompasses this place and wars with my very purpose in being here. Such an idyllic place shouldn’t harbor evil. But the threats are as real here as anywhere else, and there is little rest for the weary or the damned.

This entire endeavor is a joke, despite my agreeing to take it on. A reckless decision and a waste of my time, something I’d have never agreed to mere months ago; I’d have assigned it to an underling in a second. Groundwork that should have been done by one of our true undercover agents with more meat than brain. Sure, there is some insight to be gained from the meetings and the people, but it isn’t a necessity. I’ve been going through the motions—rote, even though being so active in the field for the first time in years had made me excited at first. Only pure determination and stubbornness have kept me going to this point. I have a job to do, and I am damn well going to do it and do it well. I refuse to admit anything is wrong. Kicking a pebble across the worn stone path, I sigh in resignation as much as exasperation. I feel petulant, not at all like the thirty-five-year-old professional I supposedly am.

There’s a pub at the end of the road, typical and picturesque. I feel like a walking advert for tourism as I plunk myself down at the bar and order a shot of Irish whiskey and a Guinness. The woman behind the bar looks as if she’s been there as long as the building, worn and comfortable, fraying a bit at the edges. But she has a warm smile and a kind face and greets me with both. My Gaelic doesn’t extend beyond the basics, but I respond in kind, if shortly.

Eighties Irish pop music plays over the speakers, and it is only half three, but a handful of obvious regulars are already most of the way through their respective pints. A moment frozen in time, regulars who’ve probably been here as long as the song and the barmaid.

I smile in spite of myself as I imagine Eli here next to me, his slightly unshorn hair and faint freckles blending him in nicely. The thought is followed immediately by the downing of my whiskey. If here, he’d be chatting with the barmaid, easy words and even easier smiles. She’d like him and send him a wink as she poured his beer, his near-perfect Gaelic a testament to both his intelligence and his charm. His laughter would echo off the walls, and the other patrons would glance up from their bottles, startled by the sheer happiness he tends to emit. Used to emit. Before I ruined him, and we ruined each other.

Hi; my name is Erin and today I’m talking a little bit about my new debut novel, Turn, which was out November 23rd from NineStar Press. While I have zero music ability myself (notably in the singing realm) I absolutely love music and how it resonates with us. My kids make fun of me all the time for bursting out into song lyrics … sometimes I like to pretend I’m in a living version of the game Encore!

While writing, I love to use music to help form certain scenes as I’m working. This can help set the mood or trigger a certain scope of feelings. Or, I often have playlists that remind me of my characters and will help keep me in their mindset as I write. Neither Nathan nor Eli, the two main characters in Turn, are particularly close to me characteristic or temperament wise so there were definitely times I had to really realign my thoughts before writing certain scenes and music would help me with that.
Sometimes a song I’m listening to will randomly inspire an entire scene, which is actually where the Ireland scenes in Turn came from (keep reading for an exclusive excerpt!). My personal playlist was on shuffle one day and “Molly Malone” and “Come on Eileen” ended up playing back to back and my thoughts drifted to my work in progress and sparked an idea and those scenes were born.

Below is the playlist I had for writing Turn (it’s pretty eclectic!). Once you’ve read the book, come back and see if you can guess some of the scenes that these songs inspired or set the tone for.

• “It’s Been Awhile” by Staind
• “Leaving on a Jet Plane” by Chantel Kreviazuk
• “Stay” by Lisa Loeb and Nine Stories
• “Carry On” by Fun.
• “Superman” by Five for Fighting
• “Kryptonite” by 3 Doors Down
• “Come On Eileen” by Dexys Midnight Runners
• “That’s Amore” by Dean Martin
• “Molly Malone” by Easter Rising
• “Slide” by GooGoo Dolls
• “I’ve Got You Under My Skin” by Frank Sinatra
• “It Had to be You” by Frank Sinatra
• “La Gazza Ladra” by Gioachino Rossini performed by the Prague Philharmonic Choir
• “December, 1963” by Frankie Valli & the Four Seasons
• “Save Me, San Francisco” by Train
• “Big, Big, World” by Emilia
• “Here’s to the Night” by Eve6
• “Finlandia” by Jean Sibelius performed by London Philharmonic Orchestra
• “Ma Vlast” by Bedřich Smetana performed by London Philharmonic Orchestra
• “Blank Space” by Taylor Swift
• “This is Not a Love Song” by Tabitha’s Secret
• “Bella Luna” by Jazon Mraz 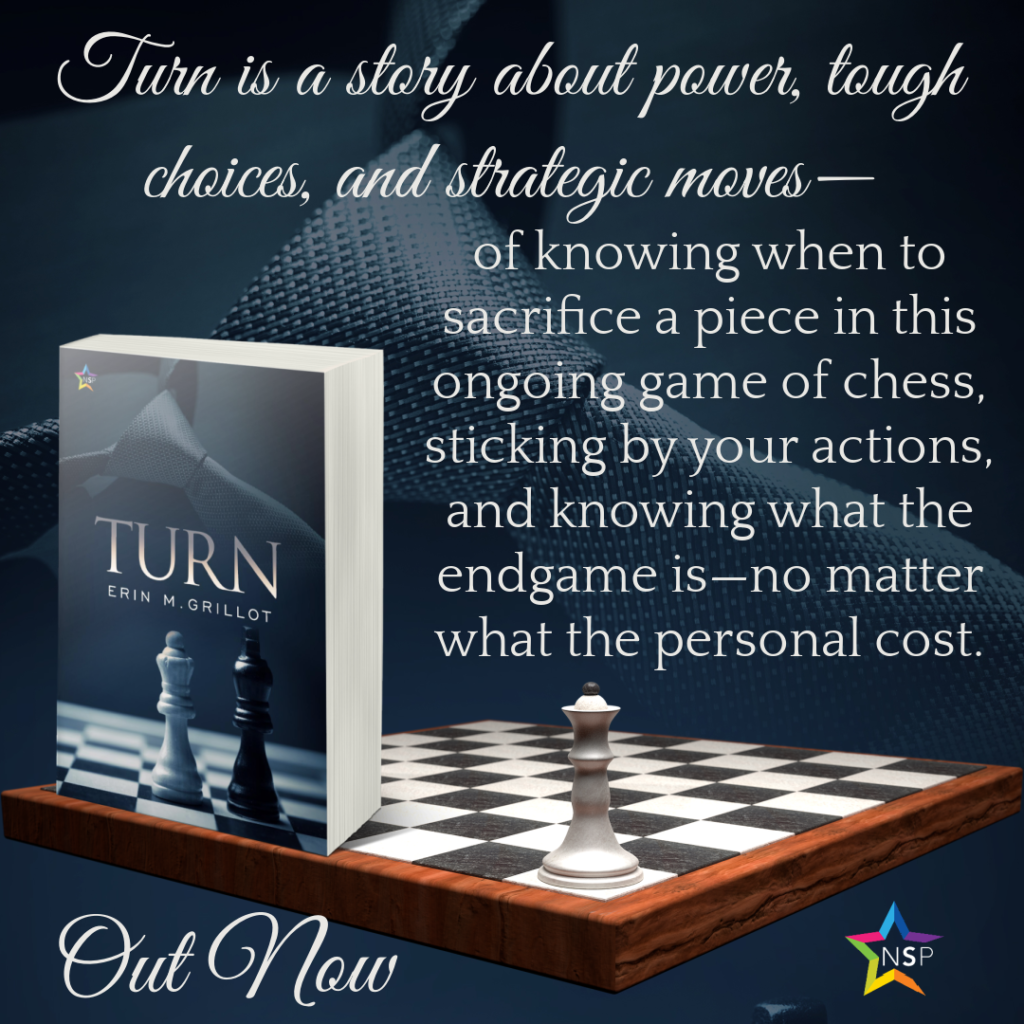 Erin is a native Midwesterner who has spent her life loving words in all their forms. Turn is her first novel. She lives in Iowa with her three children. An avid wine lover, introvert, coffee addict, and nerd; most of her free time is spent with her children, reading, or writing. Find Erin on Twitter.

12/1 Never Hollowed By The Stare 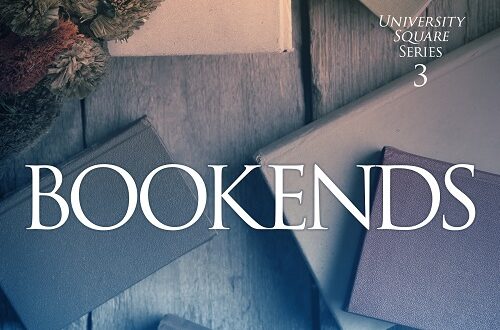 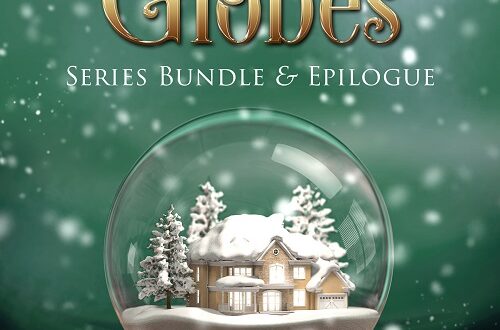 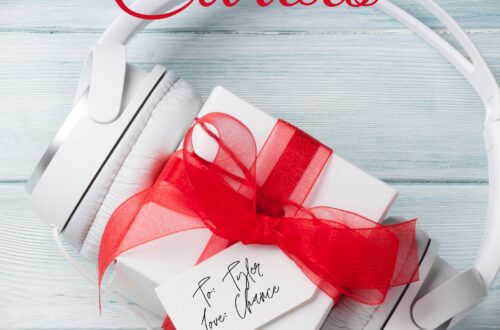