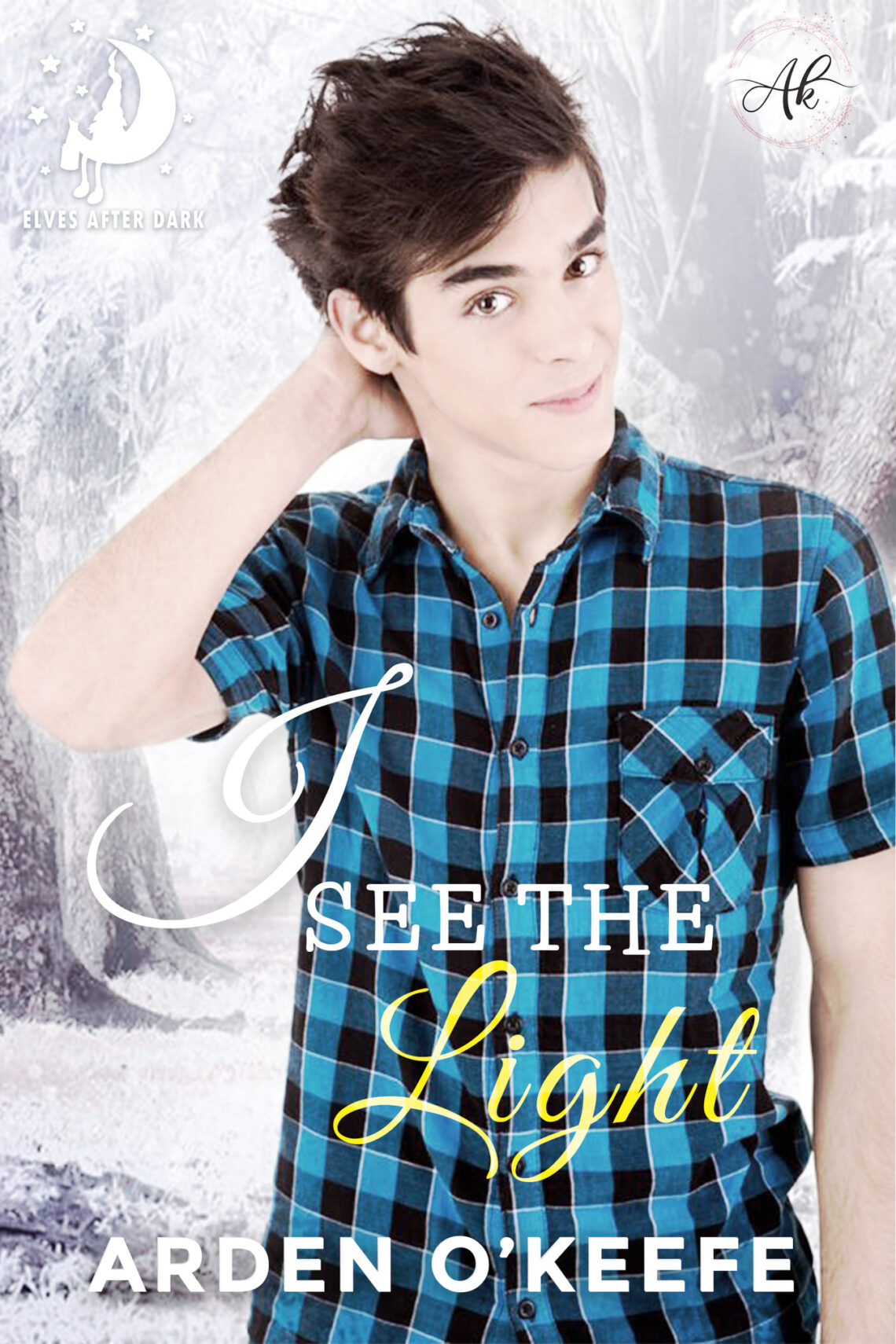 I See The Light by Arden O’Keefe

Heath had always been a misfit – a weirdo who went all over town in a tank top and shorts even on a coldest day; who claimed his dog could talk to him; who saw this blinding light every Christmas Eve coming from the woods behind his house that no one else saw.

Even his mother made all sorts of excuses to stay far away from him. If it had not been for his grandma – who did love him despite all his oddness, he would never have had anyone to call his own.

The night before Christmas, with the silliest plan in mind and his coward dog tagging along, he sets out to find the true source of the mysterious light he sees from his window. When he finds the cheerful bunch of elves gathered around the magical bonfire celebrating like kids high on sugar, Heath could not be more excited. Then, finding out that he is half elf and half human gives a meaning to his life; finally understanding the reason behind his weirdness.

Buddying up with a cute elf named Shea for the night to see what it means to possess the magic of an elf, Heath goes on a journey to spread the gift of happiness amongst those who have been good this year. But when the night comes to an end, he is asked to make a decision.

Whether to embrace the magic of an elf within him completely or become a plain, old human and go back to living an ordinary life; back in the world where he was never accepted and to the universe which didn’t have Shea in it…

When Chrissy came back down, lugging a large suitcase behind her, she didn’t even spare a glance at her mother, brushing past May and out of the house. Her mother quickly went to the porch and watched as Chrissy threw the suitcase in the backseat of her old Chevy and drove off without saying another word—even to her son.

May had a feeling it was likely the last she’d ever see of her daughter, and yet, she didn’t try to stop her. There was no point. It was time for all of them to move on.

However, as May thought about raising a five-year-old by herself, she was overcome with emotion as she sat on the front step. Her tired eyes welled quickly as her head filled with new worries. She knew she was in for a difficult road, but several questions still haunted her about the boy—how could she keep him safe from those who wanted to do him harm, because he was so unique? That was her primary concern.

When a small hand touched her shoulder, May quickly wiped away her tears and turned to the sweet boy who sat down beside her. She picked him up with some difficulty and sat him on her lap, his big brown eyes reminding her of Chrissy.

A lump formed in her throat, but May refused to let out the sob that wanted to make itself known. “Hi sweetie. I thought I put you to bed.”

The little boy rested his head on her shoulder and said, “I couldn’t sleep.”

“You couldn’t sleep, because Gramma didn’t tell you a bedtime story tonight, right?” May asked in a voice just above a whisper, to which he simply bobbed his head. “Come on. Let’s go inside, and I’ll tell you whichever story you want to hear tonight, okay?”

“Where did Mommy go, Gramma?” the small boy asked timidly.

May wasn’t sure what to say. How was a five-year-old child going to process the concept of abandonment? It was a fact, indeed, that her daughter had abandoned her only grandson. “Your mommy—she went on a road trip to the North Pole. She had to go tell Santa what a good little boy you’ve been and that she wanted the best-est presents sent for you this year.”

“But… but, tomorrow is Christmas,” the boy responded, raising his head to look at May. “Will she be back tomorrow?”

May smiled down at him, her sad expression had to hide. “I don’t know, sweetie. I’m not sure.” However hard she tried, May couldn’t stop the tears from escaping her eyes

“Sweetie…” That was all she could manage to say between her tears. Looking into his innocent, questioning eyes, May just couldn’t lie to him.

The boy sat up a bit before offering his defense. “I went into the woods, because I wanted to find that light, Gramma. Mommy said I was lying, because she couldn’t see the light, but I saw the light. You said you saw it too. How come Mommy couldn’t?”

May sniffed before wiping her tears with her free hand. “Yes, yes, honey. I can see it. It shined so brightly last night.”

The little boy gave her a look of disbelief. “It’s… I see it now, too. See there?” He pointed toward the woods to the left of the house.

May looked in that direction and offered a smile. “Oh yes, it’s so beautiful, isn’t it, honey?” When she didn’t get a response, she turned to look at him again and asked, “What’s wrong?”

“You don’t see it, do you, Gramma. The light is on the other side of the woods. You didn’t say the truth, and you said God punishes people who lie. Will God punish you?”

May pulled him closer and hugged him tightly. “I’m so sorry, honey. I didn’t mean to lie,” she responded, cradling him for a while in her arms.

“No! No, you’re not, honey. Look at me… you are not crazy. Your mommy was wrong to say that. I know we can’t see the light you see, but I believe in you. I believe it when you say you see the light. It’s God’s way of telling us that you’re special. It must be God’s purpose to show that light to you.”

The boy furrowed his brows. “Then… Then, why didn’t God take me to it? I went to find it, Gramma, but I got lost. The light kept running away from me.”

May looked into the woods in the direction the boy had pointed, carefully choosing her words before she answered with a smile, “Maybe it’s just not the right time for you to find it. Maybe you’re meant to find it when you’re older? I guess you’ll have to wait.”

Arden O’Keefe has several passions and reading is one of them. It is through reading the works of several loved authors that O’Keefe was inspired to craft out some personal creations. The muse never stops to motivate and that’s how the story of Edric and Dean just developed by itself. This is where O’Keefe begins the journey hoping that it doesn’t end anytime soon. 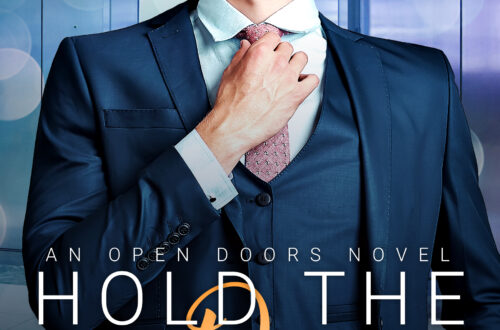 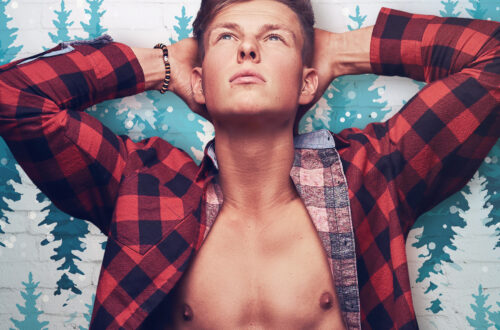 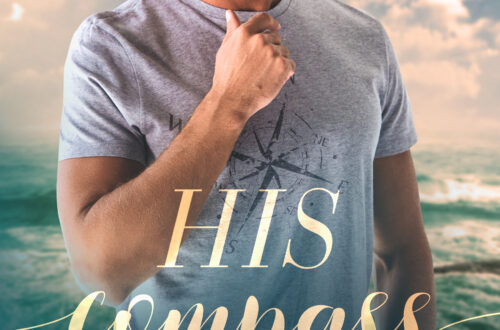