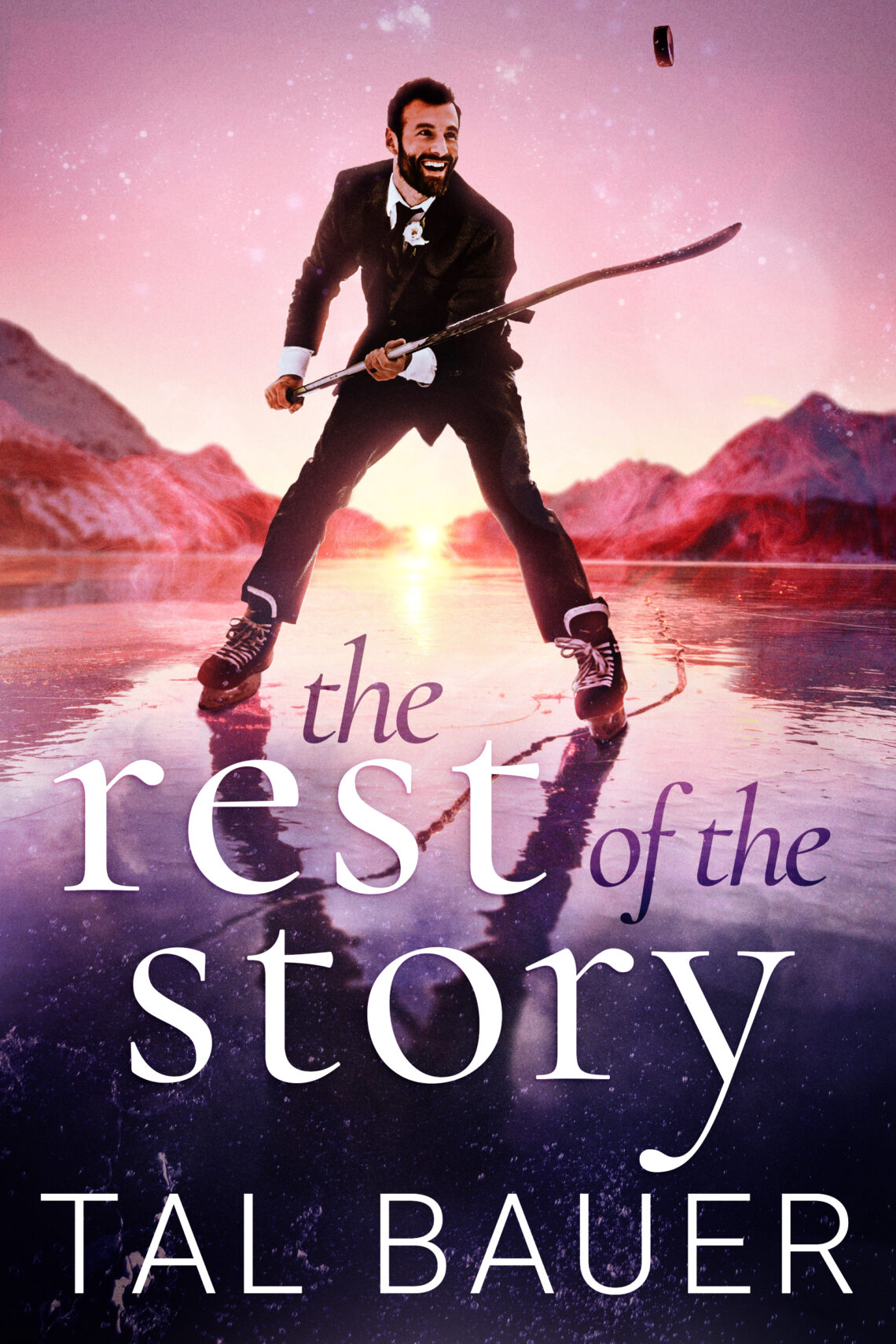 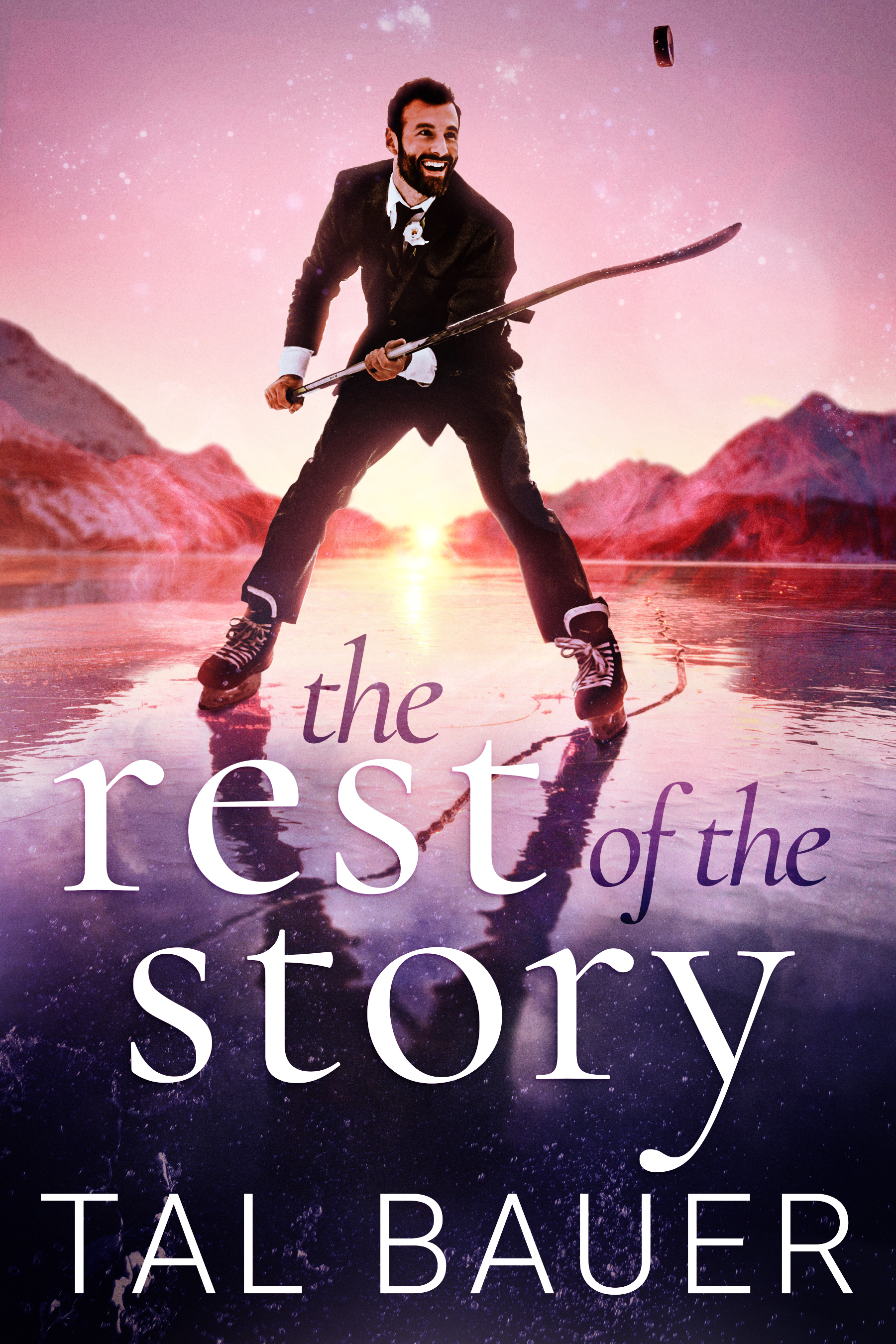 THE REST OF THE STORY

Let me earn it.

I keep things simple. I’m a classic one-night wonder. Relationships? Are you out of your mind? No. No way. Not interested. My heart is vulcanized rubber, puck hard, and that’s the way I like it.

Then I’m traded to the absolute worst team in the NHL, the Rocky Mountain Outlaws, and I’m hit with a one-two punch.

First: I’m asked to step up and lead the team, which is every kind of bad idea you can imagine. I’m a head-down, mind-my-business kind of guy. Mr. Uninvolved, Mr. No, Not Me, Mr. Find Someone Else. But these players have been through a mess of hell, and someone thinks I can help pull them together.

The Outlaws are made up of jaded veterans and wide-eyed rookies, and we have no business whatsoever succeeding. We are scrappy and plucky and built out of spit and duct-tape… and whatever we’re doing, it’s working.

Second: The first day I’m in Boulder, I go over the boards and come face-to-face with a pair of blue eyes and lose my heart. Boy, howdy: meet my new co-captain, Shea Darling.

He’s way, way off-limits. It’s a stratospherically terrible idea to want or crave him. This crush, this infatuation, is going nowhere fast.

Yeah, right. I’m gone for Shea. I’m head over heels, and I’m all tangled up in something I can’t understand or control. This isn’t me. I don’t fall in love. And there’s nothing simple about Shea, or about the Outlaws. This team is finally putting up the wins, and we are making something of ourselves. Falling for my co-captain while we’re on a Cinderella run could jeopardize everything we’re striving for.

But then there’s this one night.

And this one kiss.

Eighty-two games in a season.

One co-captain who could be my forever.

This is the rest of the story.

The Rest of the Story is a friends-to-lovers, hockey players/teammates MM romance, and includes themes of survivorship. 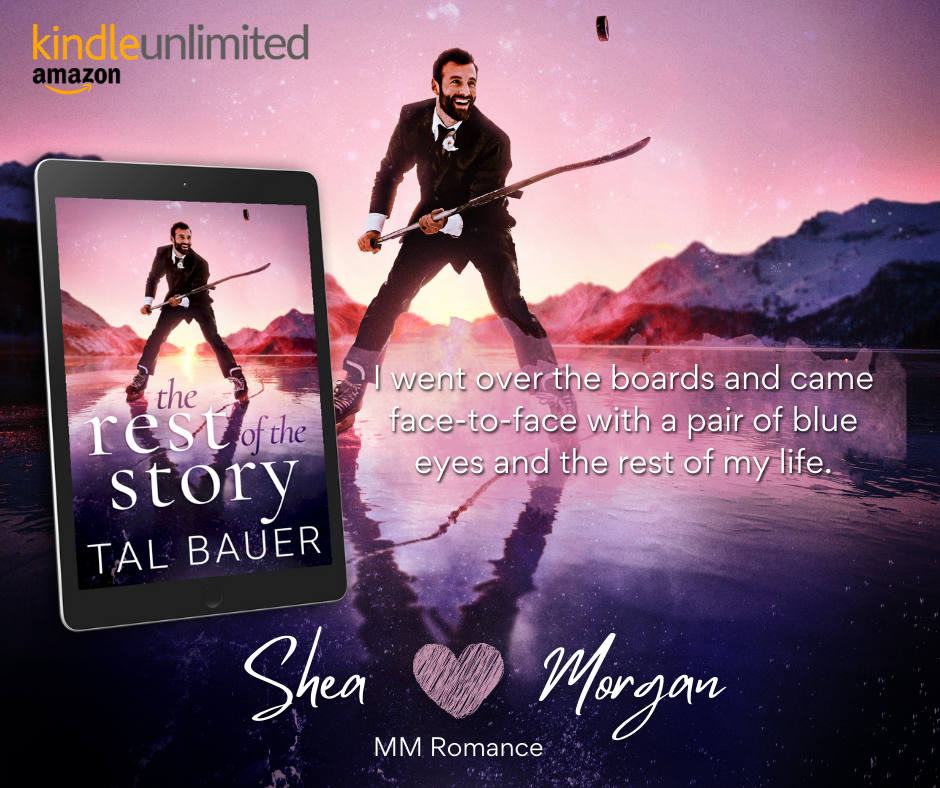 We picked up a win in Tampa and got to enjoy an off day before our flight home. Snow was already falling on the peaks in Colorado, but Tampa Bay was eighty-five degrees and drenched with sunshine. We hit the beach.

It was a postcard day. Waves shimmering like scattered diamonds, the surf playing peekaboo with the nearly ice-white sand. I plopped my ass on my towel, buried my toes, and listened to the waves… and the sounds of my team, roughhousing in the shallows, shit talking their way through a beach volleyball game, and then deciding it would be a fucking brilliant idea to rent Jet Skis and race each other around the bay.

I lay back, ready to blank out my mind and replace everything in my skull with sunshine and indulgence. Float around on my subconscious, daydream the afternoon away.

A body thudded onto a towel beside me, wet enough to flick damp seawater across my chest and kick sand over my calves. I rolled, glowered, ready to unburden my substantial irritation at my intruder—

Shea—shirtless, in low-slung board shorts that barely clung to his hips, water dripping down his skin—was propped on one elbow and grinning. “Hi.”

I couldn’t have told you my name with a gun to my head. Every thought had been replaced with him, with the way seawater was moving down his clavicles, with how the sun was already bringing out hidden freckles across his chest. His long legs were lazily crossed, toes tickling the sand, and his hair was finger-combed back from his face. Miles of hockey-player-pale skin was on display. It was almost lewd, lascivious, even, how he’d show the world how gorgeous he was. Were other people as stunned, as speechless, as absolutely bamboozled as I was? Was he causing traffic accidents on the road fronting the beach? What if someone drowned because a lifeguard couldn’t tear his eyes away from the happy trail escaping down Shea’s abdomen and disappearing beneath the shoelace tie of his board shorts? Jesus, one tug of that lace and God’s gift was on display.

I exhaled, grunted some kind of vocalization, my wonderful way with words really coming in clutch. He kept right on grinning, head tilted and resting on his shoulder, his eyes hidden behind sexy little mirror aviators. It should be fucking illegal to smile like that, looking like that.

I hadn’t dressed to impress on this beach trip. My own board shorts were probably ten years old, stamped with big, bold hibiscus flowers in a gaudy tropical print. And no one who looked at me—broad, furred chest scattered with old scars, a layer of padding around my middle that made me “stocky”—was going to be singing hallelujahs or crashing their car in wide-eyed delight.

Why was he here? I found my tongue and kick-started my frontal lobes. Put words in order. Breathe in and out. My standards for getting through the next few minutes were not high. I wasn’t sure I could meet them. “Uhh, you’re not— You’re not going with—” Down the beach, we heard the roar of engines and the high-pitched laughter of Logan and Brody.

“Nah.” Shea flopped back, threw his arms over his head. I could trace his biceps and his forearms into the sand with my fingers, create a perfect outline of him. “You have the right idea,” he said on a sigh. “This is perfect.”

Sure, perfect for him. But now there was a marching band in my chest, fireworks blazing beneath my skin, and big ol’ bongo drums and shimmy-shimmy tambourines going wild inside my skull. Plus, I needed a moment and some deep breathing exercises. Certain things had to calm down.

There went my afternoon of not thinking about Shea. 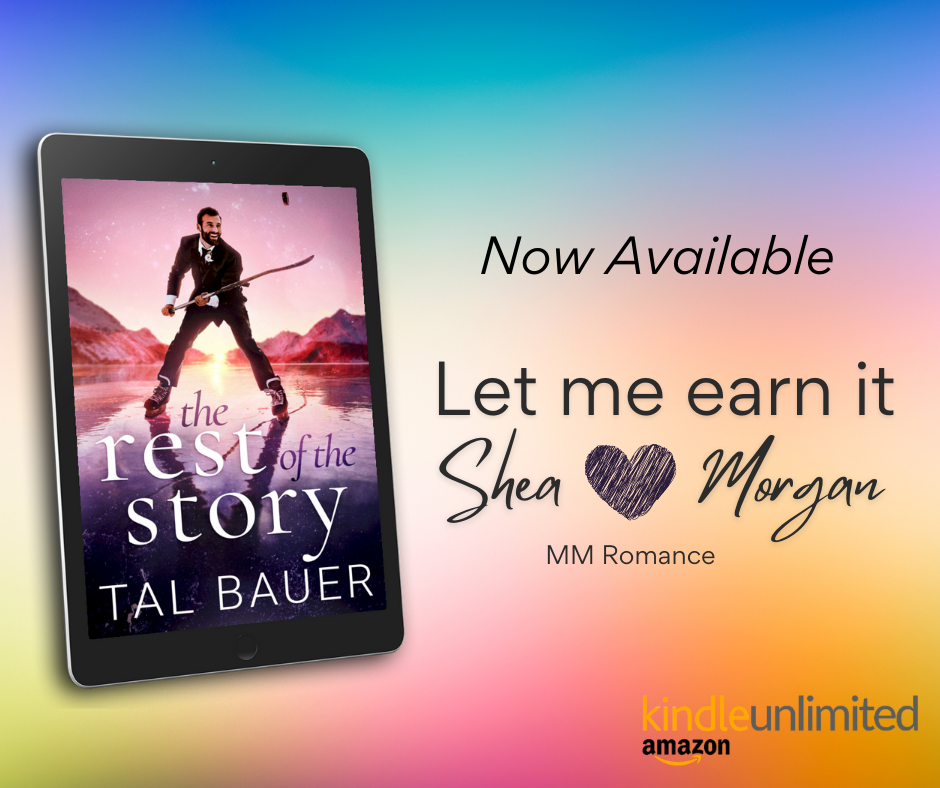 Tal Bauer writes breathtaking and heartfelt gay romance novels. His characters are head over heels for each other, and fight against all odds for their happy ending. Nothing stands in the way of love. 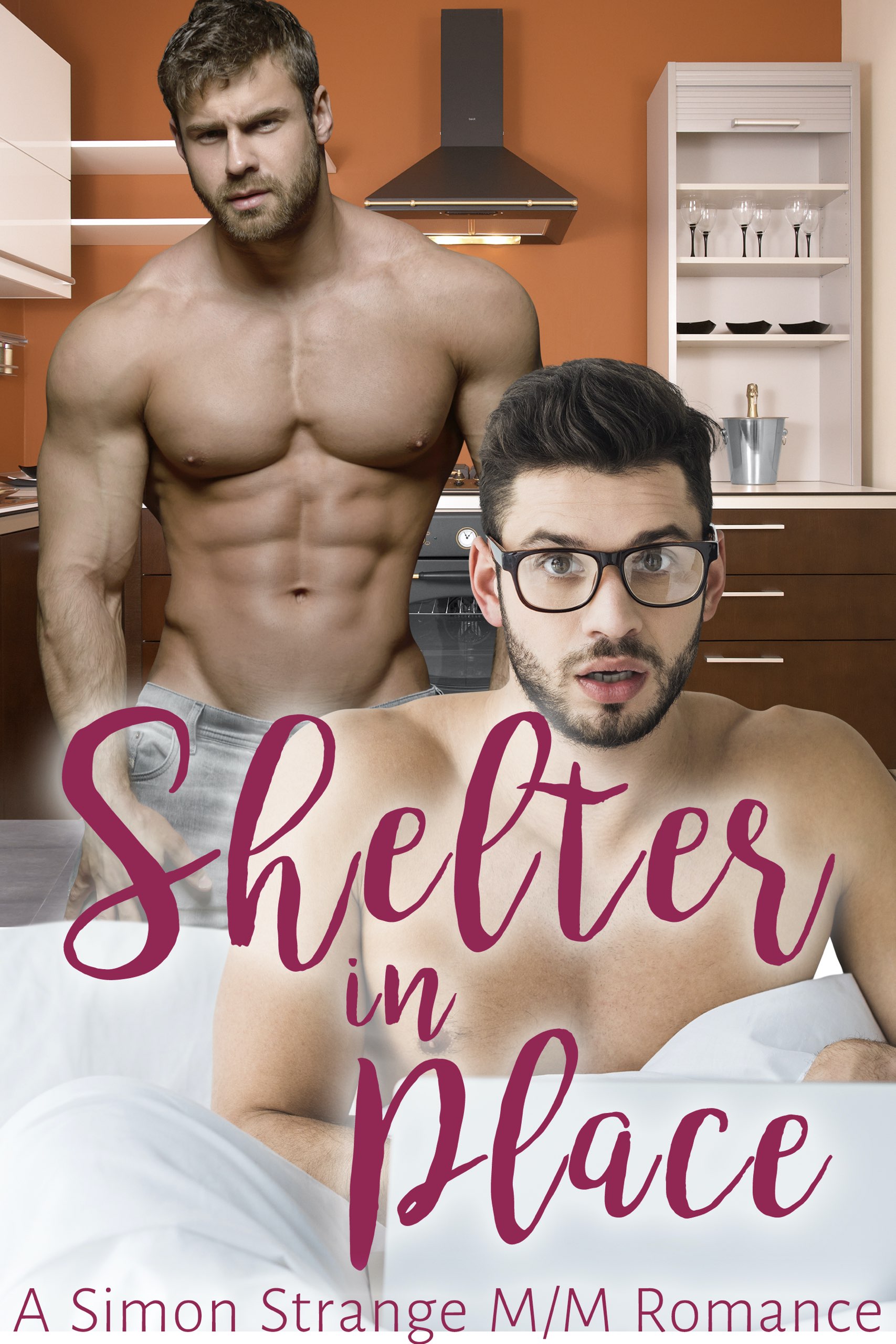 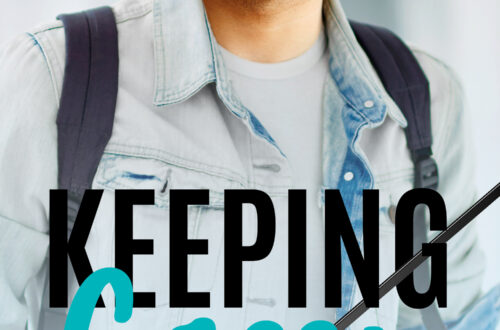 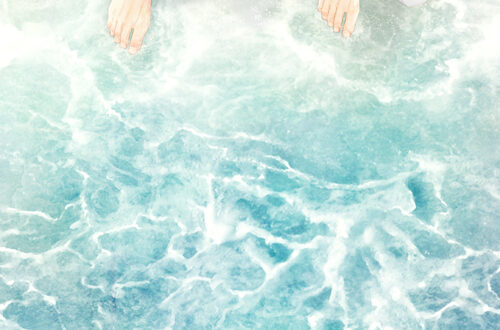