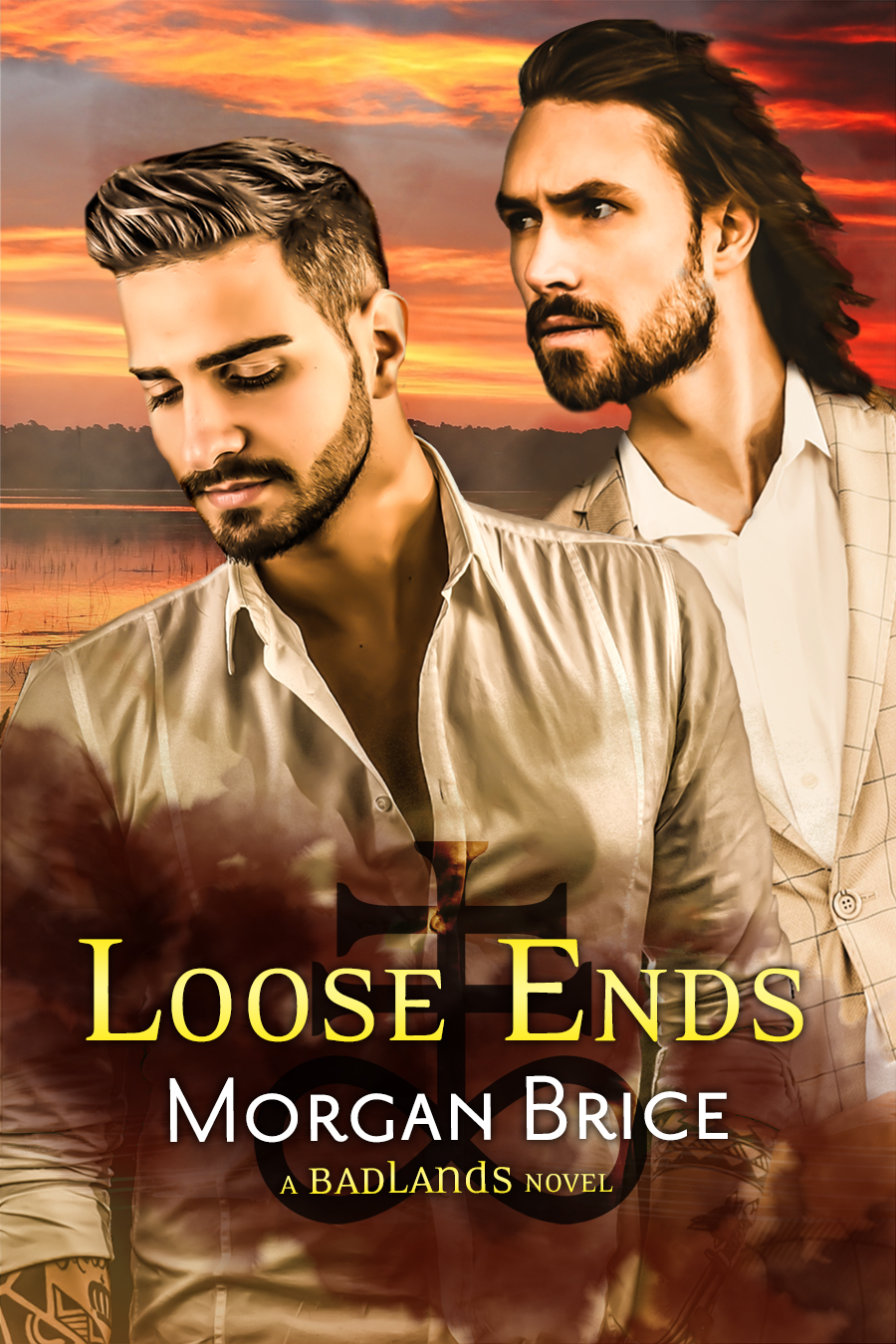 features an evolving, established romantic relationship with all the feels.

Intended for readers 18 years of age and older.

As a deadly trap closes around them, can Simon and Vic tie up the loose ends to stop the threat, or will they become the newest ghosts of the Grand Strand?

The ghosts of Myrtle Beach are restless, trapped by love, secrets, scandals, and spells, keeping Simon busy protecting the living from the unhappy dead. Someone from Vic’s past is out to destroy him and everyone he holds dear, and the high-profile trial of the first case Simon and Vic worked together puts them in the spotlight—and put a target on their backs. As a deadly trap closes around them, can Simon and Vic tie up the loose ends to stop the threat, or will they become the newest ghosts of the Grand Strand?

Loose Ends is an urban fantasy MM paranormal romance with spooky supernatural suspense, hot sex, hurt/comfort, feisty friends, found family, ghosts galore, and dark magic. It is part of a series but can be read as a standalone and features an evolving, established romantic relationship with all the feels. Intended for readers 18 years of age and older. 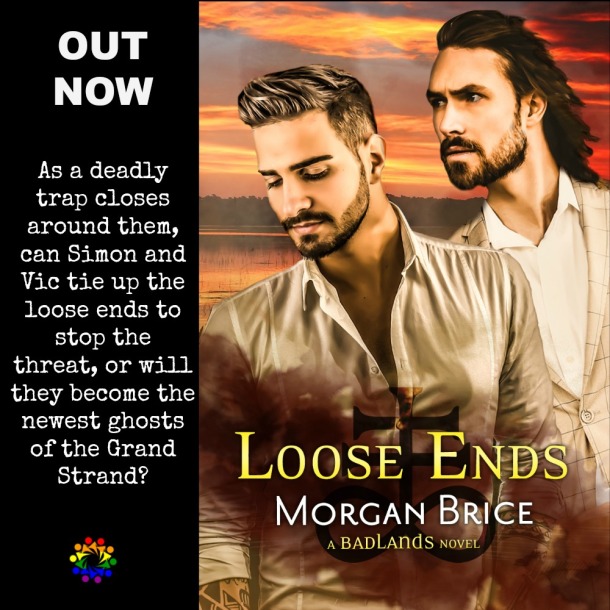 “The hauntings are worse than ever. Someone else is going to get killed.” Josh Ryan hunched over his steaming cup of coffee. Out front, Mizzenmast Coffee was packed with java addicts

waiting in line for the best, and only, pirate-themed specialty coffees on the Grand Strand.

That was why Simon Kincaide had ushered his guest to the less- used second seating area, which still had a full-sized pirate statue, a treasure chest, and a motley stuffed parrot from its days as a bucca‐ neer attraction. Tracey Cullen, Le Miz’s owner and Simon’s best friend, had turned a building she couldn’t afford to redecorate into Myrtle Beach gold with her hit café. Only the regulars ever both‐ ered to come into the second room, which meant Simon and Josh might have a chance to talk uninterrupted.

“You guys explore a lot of abandoned places. I’ve never seen you rattled by ghosts before,” Simon observed.

Simon owned Grand Strand Ghost Tours, a logical undertaking for someone with a strong gift as a psychic medium and a Ph.D. in folklore and mythology. His abilities were the real deal, and when he wasn’t leading ghost tours or helping deal with bothersome haunts, he was an official consultant with the Myrtle Beach Police Department on supernaturally-linked crimes, along with his boyfriend, Homicide Detective Vic D’Amato.

“Yeah, well. Usually we run into cold spots, see a few orbs, maybe hear something we can’t explain,” Josh replied. “We’ve never had a ghost push one of my team off a roller coaster platform. If Cam hadn’t been a gymnast, he’d never have been able to catch himself on that beam, and he’d be dead.”

Josh shook his head. “Not Cam. He’s like a cat. And he said afterward that he felt hands on his back before he was pushed.”

Simon sipped his latte as his mind raced. Josh headed a team of urban explorers and paranormal investigators who prowled around abandoned buildings, old ruins, and the sites people left behind. They documented the beauty of decay with their cameras and video and tried to verify reports of ghost sightings. Josh was also one of Simon’s “Skeleton Crew,” the joking name given to the young, untrained psychics who found their way to Myrtle Beach and strug‐ gled to control or understand their abilities. Simon knew that Josh’s ability to sense ghosts was real. So if he said he’d seen something…

Josh nodded, ducking his head to take a gulp of coffee and hide the worry in his eyes. “He pulled some muscles. It was a hell of a dismount. But nothing broken. It could have been way worse.”

“Did you get any idea who the ghost was?”

“No. But we knew there were rumors that the park was haunted —even before it shut down for good.”

Buccaneer Thrill Park had a snakebitten history. A couple of rich out-of-state investors thought a pirate-themed major amuse‐ ment park was the kind of idea that couldn’t fail. Simon vaguely remembered reading about the park opening ten years ago before he’d moved to Myrtle Beach from the state capital in Columbia. The park had promised to offer the tallest and fastest coasters, trendy bars, a star-studded celebrity launch, and all the high-tech hoopla money could buy.

They built it, but no one came. By the end of the second season, Buccaneer closed for good, amid whispers of hushed-up visitor

deaths, paid-off injuries, and financial mismanagement. The front‐ man, Greg Ellington, was found shot to death in his office a day before the press broke the story of embezzled funds and colossal ineptitude. Thad Stevens, the other partner and principal investor, vanished without a trace.

“I’ve been poking around on the Buccaneer story since the place shut down,” Josh said. “My team’s visited probably a dozen times. Plus, I knew people who worked on the construction and disman‐ tling, and who ran the rides when it was open.” He leaned forward, dropping his voice. “They won’t talk on the record, or to the police, but I’ve heard all their stories. And the rumors that got out? They’re just a fraction of how fucked up that place was.”

Simon sat back in his chair, settling his lanky body and long legs as best he could. He warmed his hands on the hot paper cup and tucked a strand of long chestnut hair behind one ear. “Tell me.”

“One of my sources was a crane operator when they were installing the Riptide Roll steel coaster,” Josh confided. “He saw one of the workmen fall from the top of the first hill when they were assembling the ride. Says the guy died on impact. The company paid to hush it up. Same thing happened when another worker was crushed to death. A load of steel pipe shifted, and he ended up underneath it.”

“That’s not all of it. The place was only open for barely two seasons, but the ride operators had stories that would curl your hair. Riders got whiplash, one girl lost a couple of fingers, and a kid died from head injuries when his ride car came loose and crashed. Not to mention the operator who got electrocuted when he had to run his ride in the rain.”

“If the owners had to cover all that up, no wonder they went bankrupt,” Simon said, shaking his head. “I can’t believe they didn’t get shut down.”

“Their rides continued to pass inspections from the state office —or maybe someone got paid off. Still, they closed suddenly before the end of their last season,” Josh said. “Whistleblowers went to the media. The situation was going to be ugly. But then it turned out to be even worse.”

Series include Witchbane, Badlands, and Treasure Trail. Watch for more in these series, plus new series coming soon! 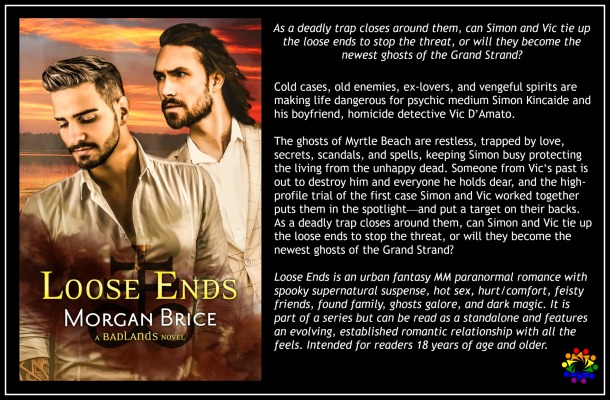 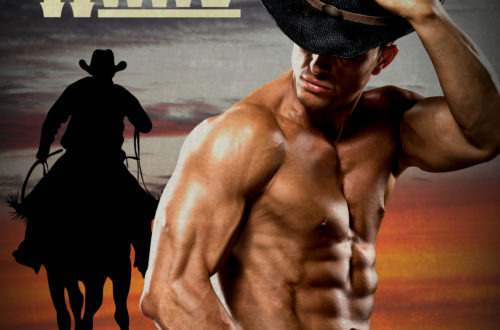 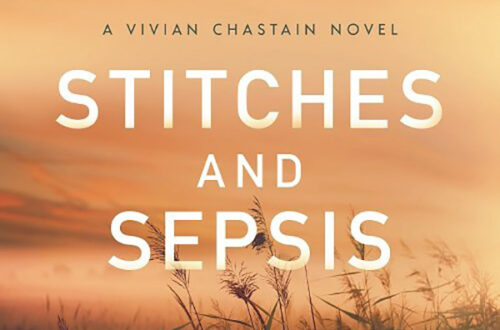